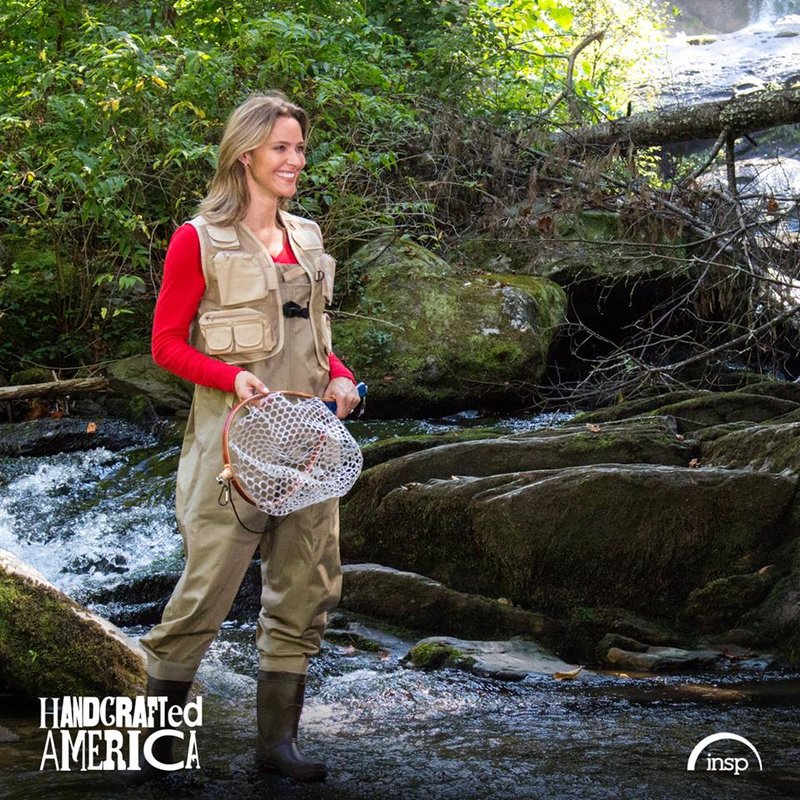 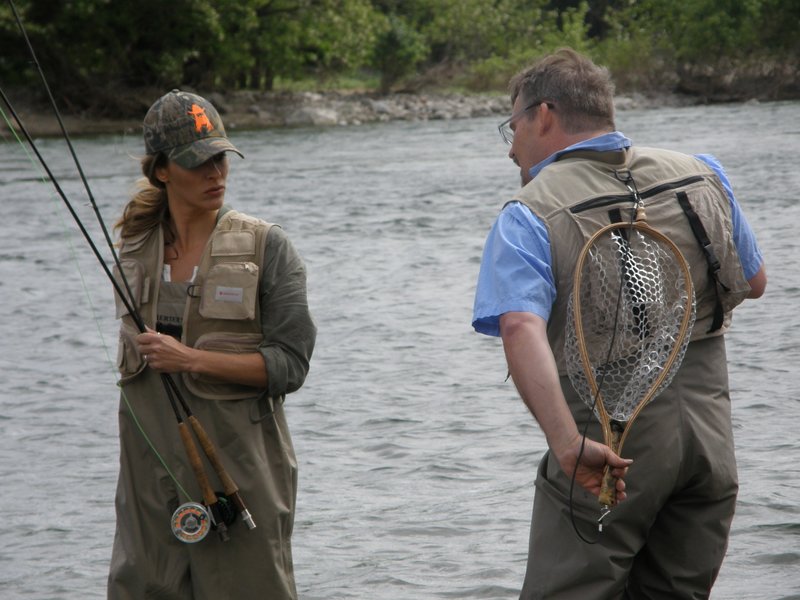 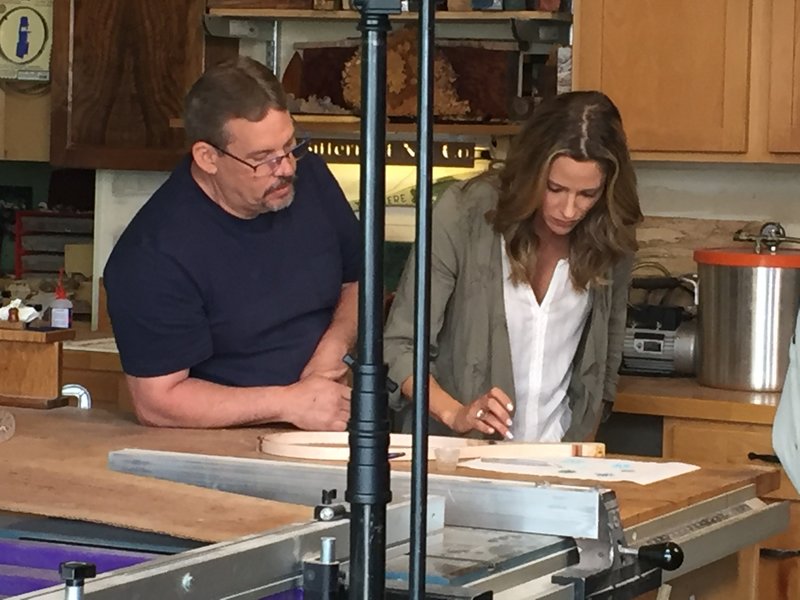 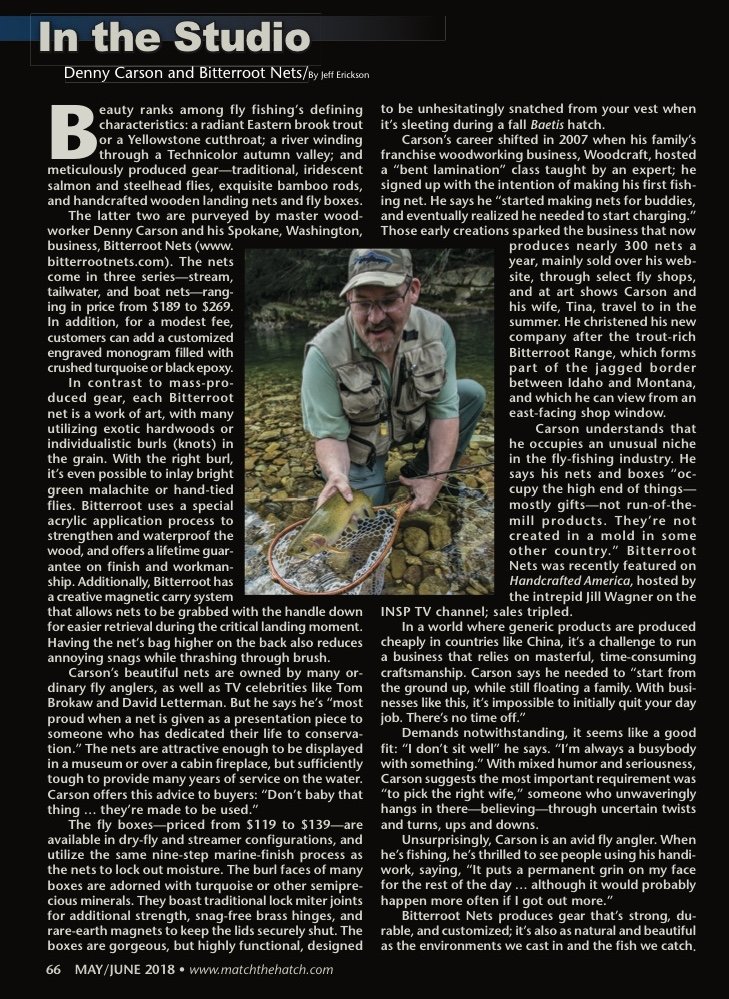 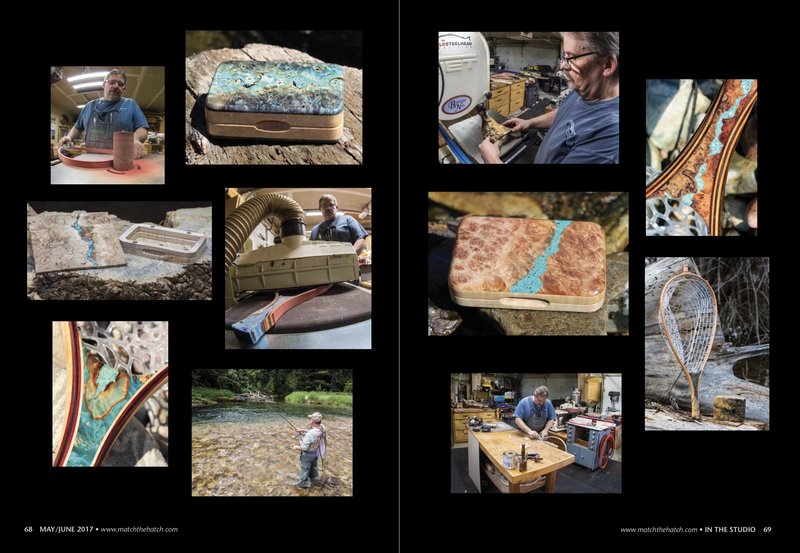 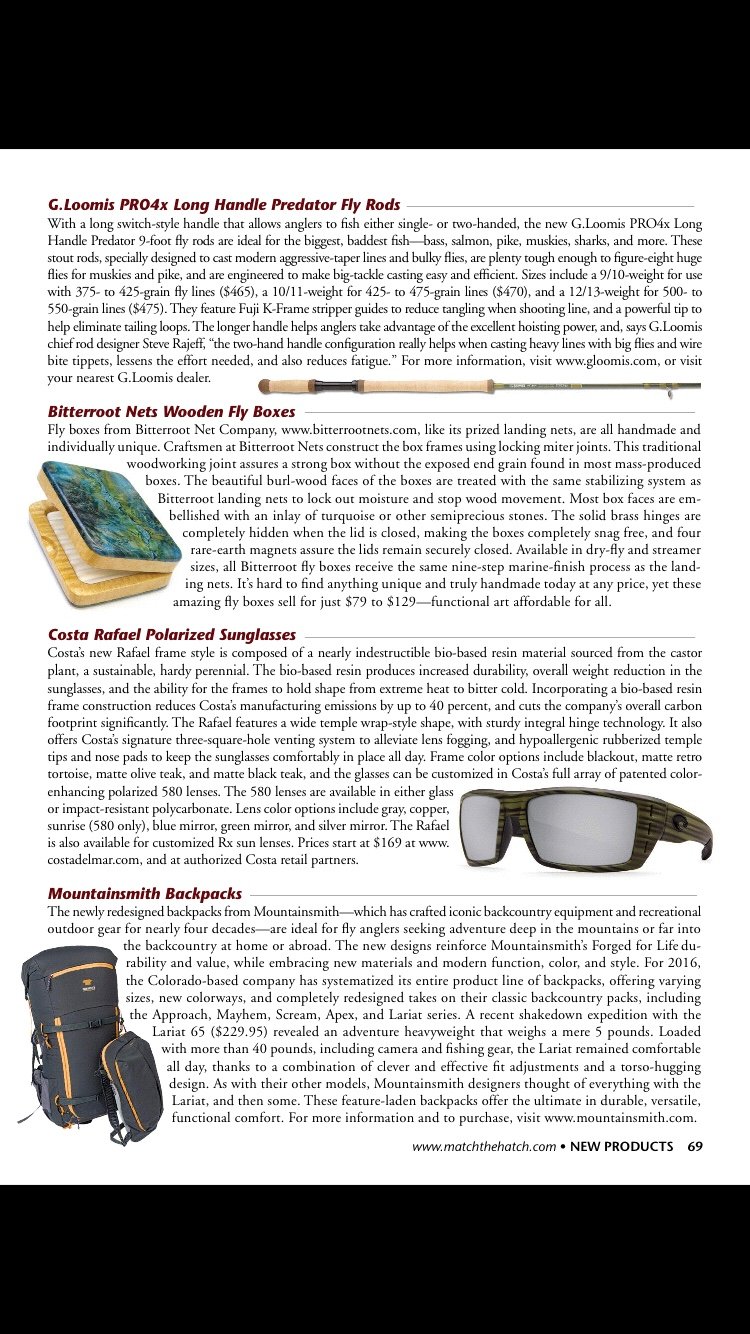 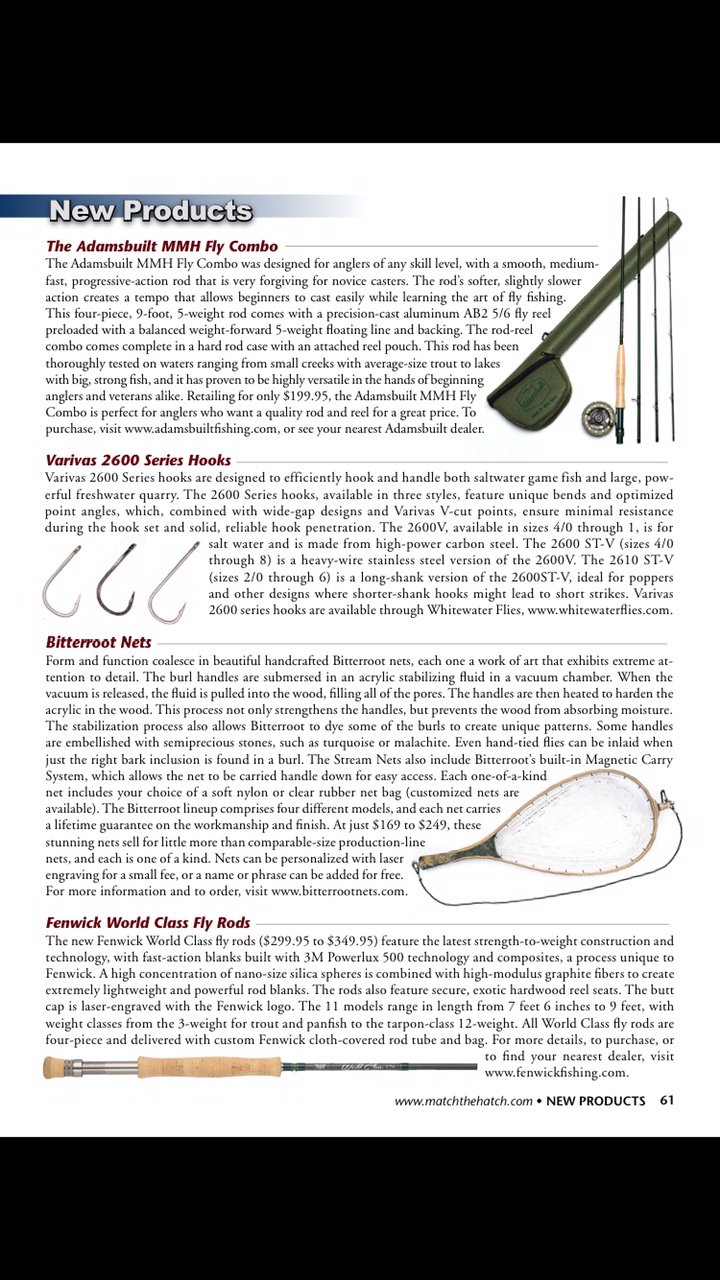 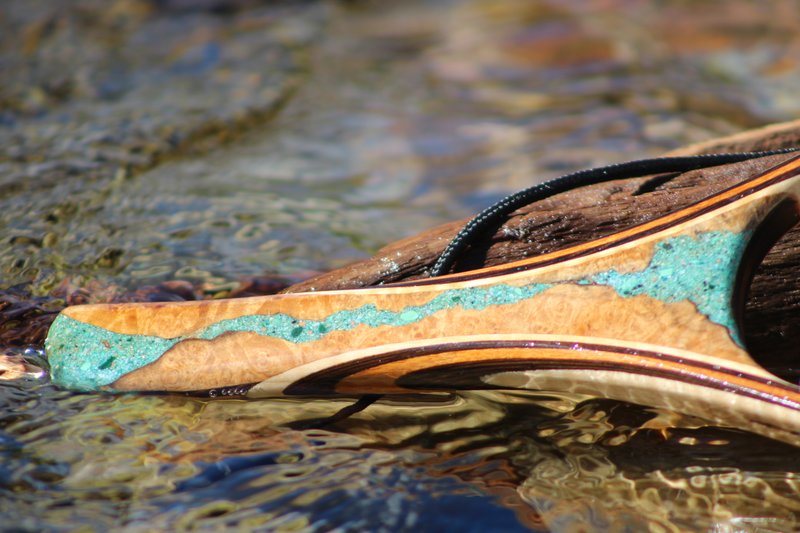 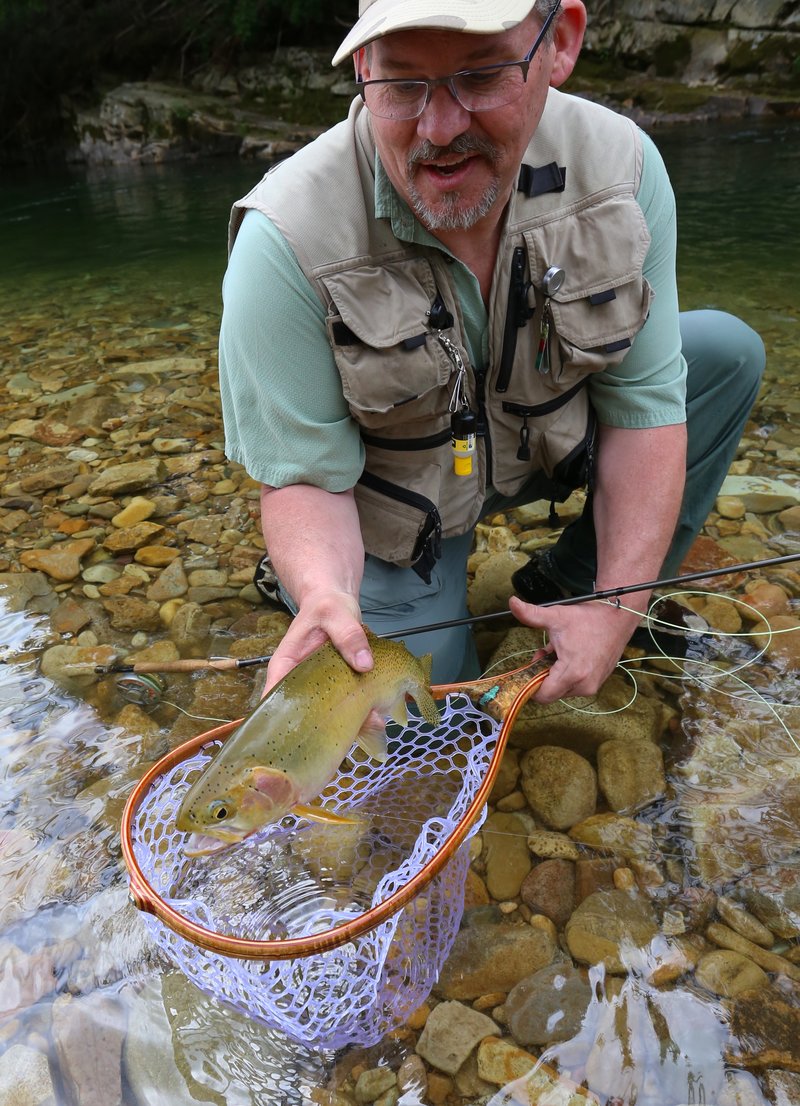 It stemmed from a class he took about 13 years ago with woodworking instructor David Marks, focused on bent laminations. Prior to that, Denny’s woodworking had been mostly building things like kitchen cabinets and furniture for himself and friends, but “I had always wanted to make a fishing net for my son, and myself, and my dad.”

After taking the class, Denny said, his net making endeavors went the natural course: “making some for buddies, and then other buddies saw them and said, ‘Hey could you make me one?’” to the point where making the fly fishing supplies has been his full-time job for about seven years. (Previously, Denny had worked as an electrician and a woodworking store franchisee.)

While his one bent wood project prior to the fishing nets involved steam bending a chair rail to be installed around a rounded conference room, Denny notes that he doesn’t steam the laminations for the fishing nets at all. “They’re a thin lamination, so it doesn’t really require any steaming,” he said. “We basically cut the strips, sand them, glue with – not an epoxy resin, but more of a plastic, urea resin – and then bend them into the form, press the handle into the form, all in one shot.” The form, developed with the help of David Marks, requires only four clamps and “basically gives the laminations nowhere else to be, if you will. Once it’s all clamped down, every one of them is exactly the same, and they’re kind of forced into the form.”

Although Denny uses the word “we” in reference to his business, mostly it’s just him, with occasional help from his 14-year-old son. He also has 24- and 8-year-old daughters, with the older helping to run the social media and online aspects of his business. “It’s a very family business, if you will; we’re all pretty much involved in it.” That’s especially true during the summer, when the family – Denny’s wife is a teacher – drives a big trailer around to art shows in the West.

“It’s really cool; we get to spend time with the family all summer long. So we now spend our whole summer going to Park City [Utah]; Jackson Hole, Wyoming; Breckinridge [Colorado], and make half of our yearly total volume on four or five shows during the summer. It’s created an entire lifestyle for my whole family, and we’re loving it.” (It doesn’t hurt that the art show locations, which Denny described as “pretty cool places,” also tend to have good fishing spots.) Since the fishing nets are made to be used, in wet conditions, Denny said he goes to great lengths to protect the wooden components from the water. About half of his nets are made of buckeye burl, which he describes as “lighter than balsa, very spongy, very punky.” Denny stabilizes this wood with a resin stabilizing system – “like a knife maker would use, or a pen turner” – to plasticize and waterproof the handle. Then, once the net is complete and ready for finish, he soaks it in a tung oil-based sealer, “so that it really soaks into the laminations, into the wood. Once that’s cured, it gets five coats of a water-based poly.”

A big reason for using the buckeye burl, Denny said, is its visual appearance: “buckeye is so beautiful, it’s so incredibly striking.” For most of his work, he noted, “You’re working with a really small palette. Most of the stream nets that I do, the handle is less than 9 inches [long] and 2 inches wide, so it’s got to be a really busy burl to be something that somebody would want, I think.”

He also uses a lot of maple, as well as occasional exotics like amboyna burl or Honduran rosewood, “pretty much whatever I can get my hands on.”

Denny also does a lot of inlay in his pieces. A few years ago in his shop, “I was just slicing burls, and a couple of the live edge pieces kind of lay down on the bench where they interlocked like a puzzle. I kind of pictured, ‘What if that was filled with turquoise?’ You can see all over the website now where I’ve gone with that idea,” Denny said. His expansion into fly boxes also came about partly as a result of customer requests – people would ask for a matching fly box for their net – and partly as a result of Denny’s desire to make more products. “I sat down and really looked at fly boxes that are being made today, and they mostly are just made with a CNC, so you’ve got nothing but end grain at both ends. It’s easy to make, but it’s not going to last too long, especially being in water, with that open grain on the ends. “So I came up with a way to build a fly box , where you use joinery and have no exposed end grain, so that it wouldn’t warp and move around.” While Denny does have a CNC, he limits its use to things like monogrammed engravings when requested by customers; his straight-grained fly boxes are made with templates and cut with a flush-trim router bit.

Perhaps his most innovative product is the I-Mag (short for Integrated Magnetic Carry System). It’s an idea, Denny says, that spawned out of actual fishing. While there are widely available commercial magnet systems for your fishing nets, he explained that they are basically a set of barrels you would put between the net handle and your vest. The net then hangs behind you as you’re walking, but, Denny said, “The problem is, it hangs it handle up. So when you reach behind your back to grab the net, you’re grabbing it by the lower section, the basket section, instead of grabbing it by the handle, where you an actually use it.” With his I-Mag system, “It’s just basically putting the magnet into the top of the net so that when you’re walking with it, it does a couple of things. With having the bag up high, all the weight is now contained, so it doesn’t swing around much at all, and when you need it, you reach back, and you’re grabbing the handle, so that you can use it much easier and quicker.”

Denny notes that he does a lot of turning – “mostly for fun” – but he also turns the little barrel that the magnet sits in as it hangs off the side of a vest.

“I’m kind of a busybody kind of person, so I’m always tweaking with something; I’ve always had a shop at home in addition to any daily work that I’ve done,” Denny said. In about a month, he’ll be moving to a new house with space for an even larger shop – part of a busy spring and summer that has him not only going to art shows in Breckenridge CO, Jackson Hole WY, and Park City UT, but also appearing on the television show Handcrafted America and in the magazine Northwest Fly Fishing.